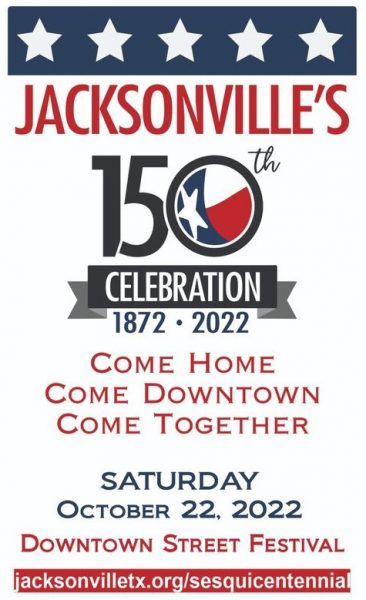 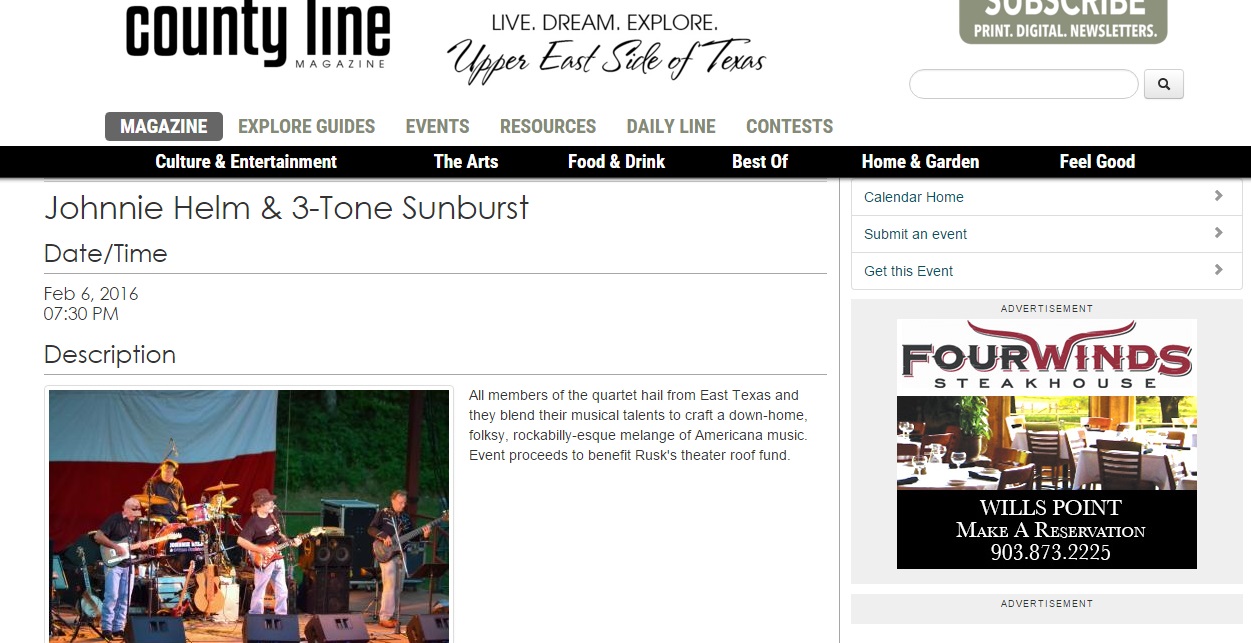 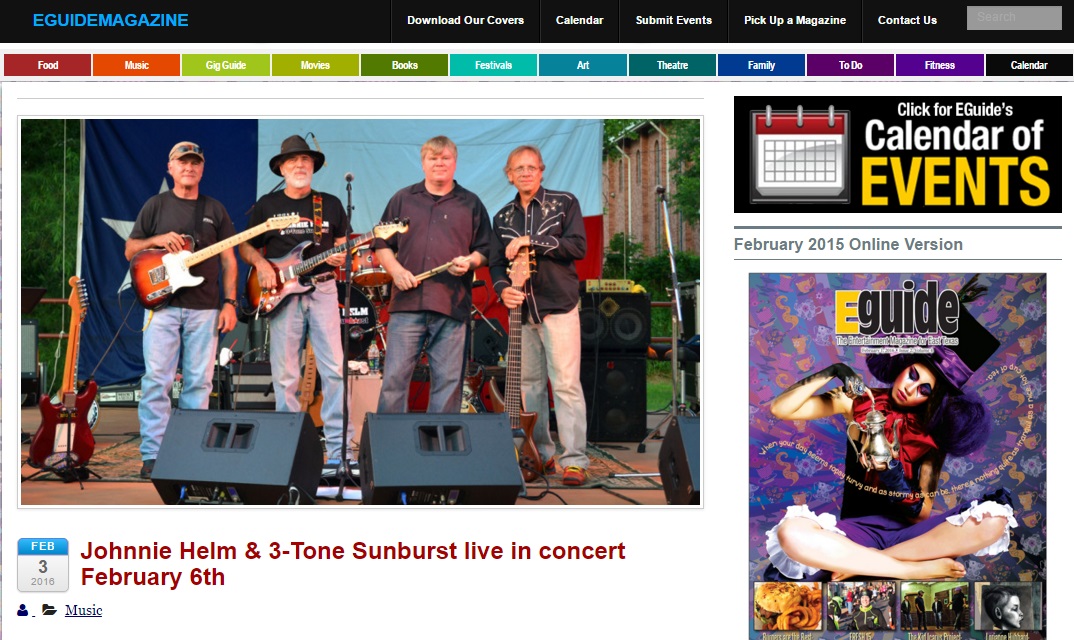 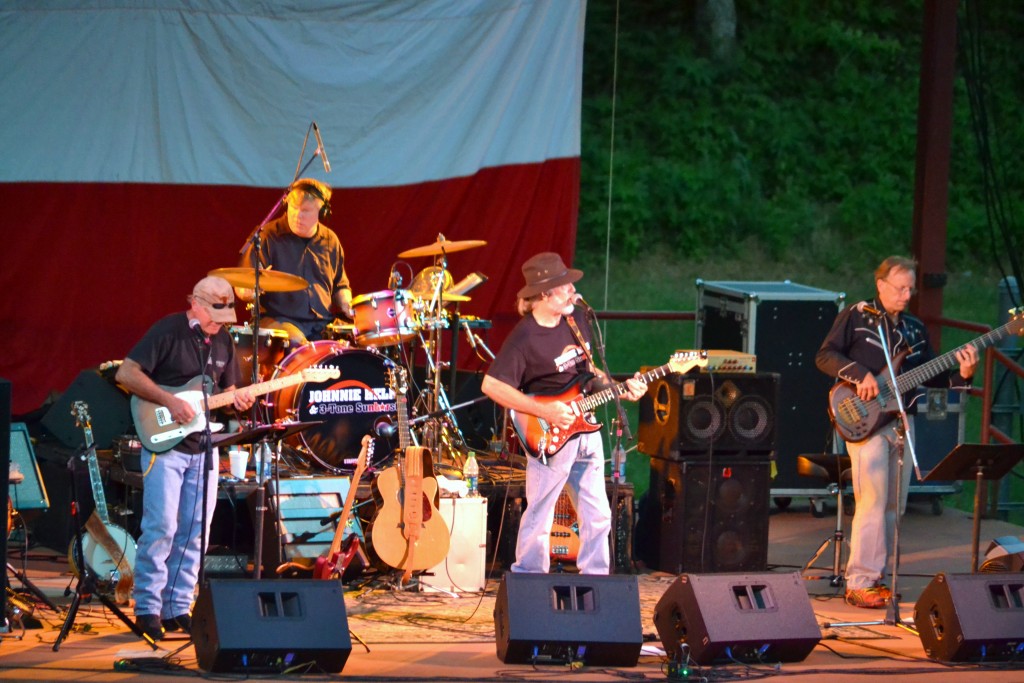 CROCKETT – The crowd gathered at the Sallas Amphitheater on Thursday, June 11 was treated to a little hometown  strummin’ as Grapeland native Johnnie Helm and his band, 3-Tone Sunburst, took the stage for the second show of the 2015 Summer Lightnin’ Series.

Prior to his Thursday evening performance, Helm discussed his musical background and what the crowd could expect. The musician said he was born in the old Grapeland hospital and that his mom was from there, but his dad was from Elkhart. Because of the rivalry between the two towns, Helm was asked if he ever felt conflicted. He laughed and said, “Surprisingly no –  not really! I was so young at that time, all I knew was Elkhart and Grapeland were small towns. I still like both of ’em!”

Now based in Jacksonville, Helm said he and his wife Trish moved there in 1973. Shortly after that, he recalled he spent quite a few years on the road. “I have a twin brother named Tommy who’s a minister. He and I had a Christian band and we traveled full time on the road for five years. I believe it was from ’73 until ’78. When the band quit traveling, Trish and I talked about going back down to Houston. She’s a teacher and can make a lot more money down there. Dallas, Austin – it’s the same thing – but we had both fallen in love with small towns and we’ve been in J’ville since ’73,” he explained.

Asked about his musical style, Helm said he played what was called “Americana” and described it as “… a mixture, a blend of stuff. As a singer/songwriter, and I do sound, but as a writer I’ve listened to all kinds of music. So, when I get inspired to write something, it might be jazz or rock and roll, or it could be country. Just from listening to all the different music – Americana, I guess, is just whatever comes out!”

He said he got his start in the music world at a young age. “My mom played guitar and her brother – my uncle, Roy Allen from Grapeland – was a gifted musician. When my brother and I were small, about eight of nine, my dad got us a couple of acoustic guitars and we started to learn a few chords,” he said.

“Then,” Helm continued, “the Beatles came along when we were 13. I have heard this story from so many musicians, but the Beatles changed a lot of people. I put that acoustic guitar down and started playing electric. I played in some little bands and I played at church and it just kind of evolved.”

With many fans picking either John, Paul, George or Ringo as their favorite Beatle, Helm was asked if he had singled out any one in particular to emulate. “You know, I didn’t have a favorite. I liked all of ’em. I liked the band. I’m a team player and even in my band, I have to be the front man because I write the songs and I’m the lead singer, but I’m really more of a team player. I don’t like the spotlight on me and I love that team thing. I don’t think the Beatles would have been the Beatles without all four.”

As to what the Thursday evening crowd could expect, Helm said, “A variety of stuff. We’ll have some country, some blues, some rock and roll, a little bit of jazz. Just a hodgepodge of stuff from a singer/songwriter that has a lot of inspiration from different backgrounds.”

The 3-Tone Sunburst band is also from the local area. Drummer Jeff Shelton is from Lindale. Alex Blair is the band’s bassist, is from Tyler,  and according to Helm, Blair is the orchestra director at John Tyler High School. Rounding out the group is Steve DeVries. Helm described DeVries as a “multi-instrumentalist” who now lives in Jacksonville, but originally hails from Lufkin. 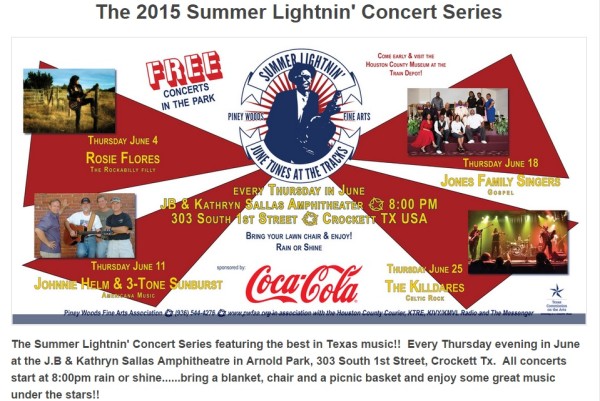